In addition to these and other trips overseas, our  pupils also participate in lots of day trips to places like the Tate Modern, the Almeida Theatre, Google Offices, the V&A Museum and St Paul's cathedral. You can read about these trips and more in our end of term newsletters.

Classicists’ Visit to the Old World 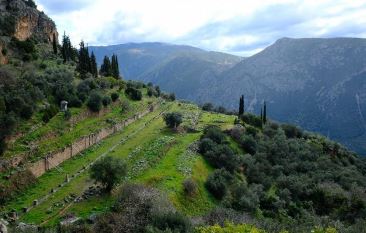 Everything about this trip was really enjoyable for me. I absolutely loved visiting the Acropolis and I will never forget seeing the ruins of a once grandiose place; it wasn’t too hard to imagine how it looked when it was all still standing during Athens’ Golden Age. I had lots of fun visiting Delphi too; the site of the Ancient oracle, that was built on the side of Mount Parnassus where the Muses were supposed to live. Dipping our hands into the Castalian Spring as the ancient pilgrims did to purify themselves was an icy start to the visit but established a real connection with the past. But visiting the Acropolis was what I enjoyed the most. We saw the enormous marble temple to Athena, the Parthenon and Erectheion – the most holy temple there (with its Caryatid porch, what is believed to be a descendant of the first ever olive tree, Athena’s gift to the City and what is left of the grand entrance the Propylaea). Just to walk up the Sacred Way to the Acropolis was an experience in itself and is something I will never forget. Sitting in the ruins of the Theatre of Dionysus, the place where drama was invented, was an amazing moment. We also spent time walking around town, eating really great food, and seeing the museums. We enjoyed our free time by shopping and having snacks along the way. I'm so glad I went on this trip as not only was it fun to spend time with friends abroad but also, we got to see such beautiful historical places. 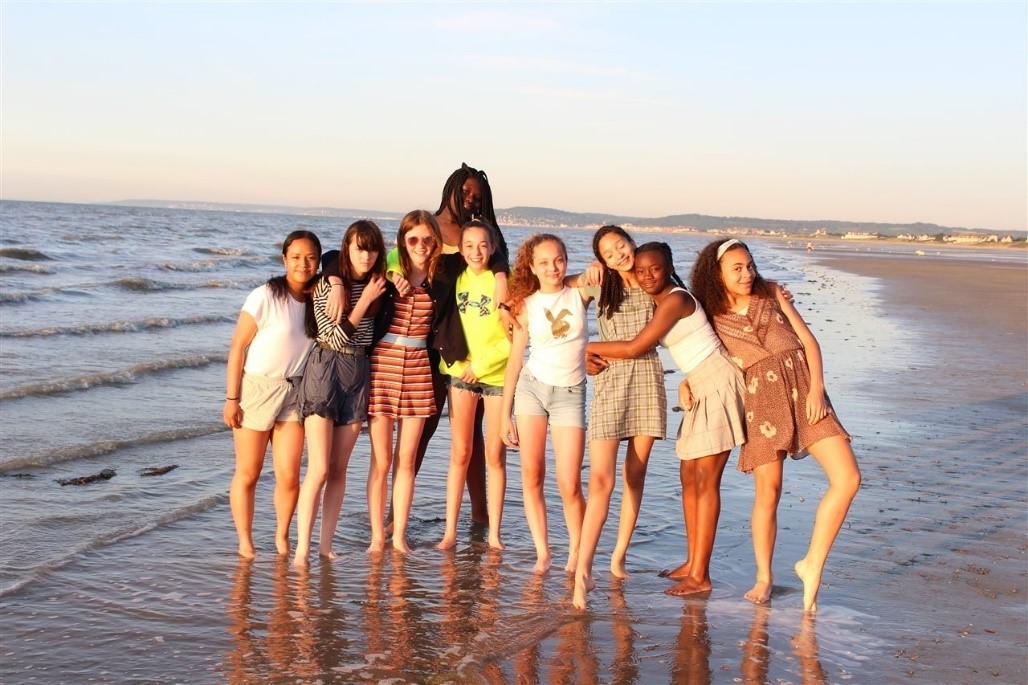 The  French trip was a huge success! For many people it was their first visit to France and I can say on behalf of my classmates what an incredible first impression France made on every one of us.
Yes, the journey to and from France involved a tremendous 12-hour journey, however we were all able to make the most of it. Whether it was singing nursery rhymes, playing music and games or admiring the French countryside, we found a way to make our coach ride almost as fun as our stay in the hotel. There were a few queries about whether the ferry ride would cause some seasickness but our time aboard the boat flew!
Once we finished unpacking at the hotel, we went down to the beach to admire the magnificent sunset. Everyone had fun as we splashed around in the cool sea. We had our dinner at 7:30pm and were served tomato soup then couscous and chicken.
The next morning, we awoke early to have a traditional French breakfast. After that we made our baguettes for lunch and were off. The coach ride to Rouen took about an hour but the journey was worth the wait. Rouen was beautiful. Everywhere you looked were small cafes, gorgeous stalls and tonnes of shops. It was like something out of a fairy tale. The architecture was astounding and so incredibly detailed. We had to complete a treasure hunt with lots of interesting tasks that made us speak to people in French, learn new vocabulary and get to know the centre of Rouen better. We also got to spend a good amount of time shopping! And the teachers allowed us to roam around in small groups of our choice to have the full French experience. Finally, we visited the extraordinary Notre Dame cathedral. After that we took a tram ride around the town to get one last glimpse of it. To finish the day off on a high note we got to go swimming in the pool back in the resort! 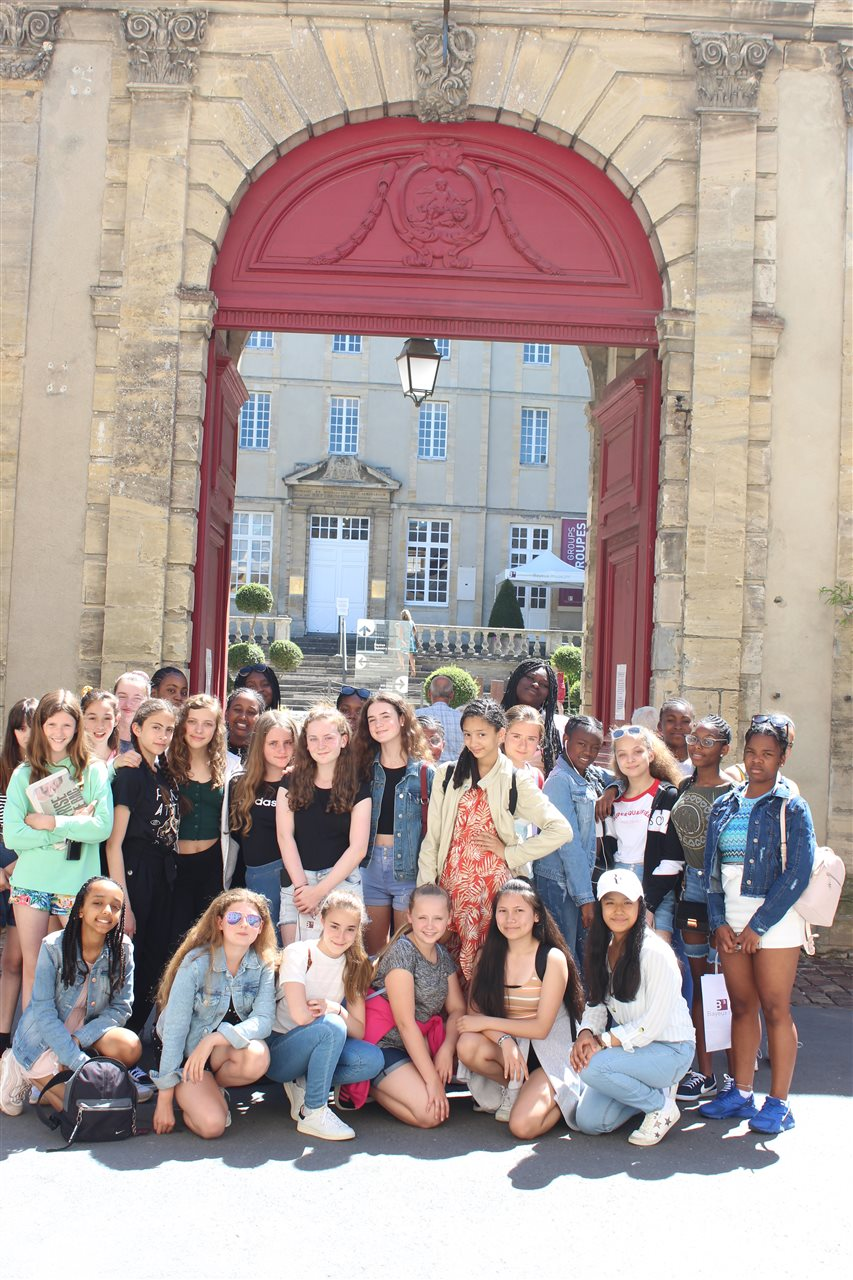 Our final day was crammed with activities. Firstly, we visited the Bayeux Cathedral which was just gorgeous; the majority of us bought souvenirs for ourselves and family. Then we left to visit the Bayeux Tapestry – the oldest tapestry in the world! This told the tale of the battle of Hastings. Then we roamed around the museum - admiring the statues and the cinema. Luckily, we found a nice, sunny spot of grass in the park for us to have a picnic before we headed off to see the DDay memorials. The first one we visited was full of holes and dips and hills since these were the spots where the bombs landed. There were also some oddly shaped buildings which we then found out were in fact the shelters the soldiers would hide in when there was a threat of bombing. We got to walk around in the hideaways and view all the rooms where soldiers would have slept, hid and stored weapons. It was a really strange feeling standing in the place where bombs were previously dropped, and wars fought.
Next, we visited the Omaha beach memorial which had the flags of the soldiers flying high and many statues to remember the war with. The last and probably most touching memorial we visited was the Omaha beach American Cemetery. Everywhere you looked was white. White graves smothered the grass like a blanket. It was strangely beautiful for a horribly gruesome war. Walking between each grave and seeing the sheer mass of devastation inflicted by WW2 made me feel rather small. We felt almost small and insignificant compared to this large memorial. It was incredibly emotional because watching things on tv, seeing photos and hearing about the DDay memorial is completely different to really being there.
To end our final day, we had a final swim and got to spend some free time together. Everyone immensely enjoyed themselves and are extremely grateful to all the staff who accompanied and prepared this trip for us.

It was the first time in Lourdes for most of us and it was truly an amazing experience. As Young Adult Helpers, we took six brilliant and energetic children on a pilgrimage holiday, which, though it left us absolutely exhausted by the end of the week, was replete with fun and enjoyment. As a group, we went to mass every day, visited holy sites such as the Basilica and the Grotto where Our Lady appeared to St. Bernadette and even went into the baths, answering Our Lady's call to bathe in the waters of Lourdes.
The undoubted highlight of the week as attending the HCPT Trust Mass: it was noisy, colourful and consisted of a lot of dancing; it was not your typical Catholic Mass! We also made the torchlight procession around the domain, and, despite the thunder and rain, we made the most of it. Plus, we sang hymns and our group songs all around Lourdes, helping us to engage with other groups. As well as this, we went to the beach at St. Jean-De-Luz, met some goats (it wasn’t a lamb) and had a group party at the end of the week where we danced the Candy! Each day ended with a song, hot chocolate and biscuits, and a prayer for all those at home.
Going to Lourdes was very rewarding and it is a truly beautiful place. It was an extraordinary experience and we would encourage any future 6th formers to take up this incredible opportunity. 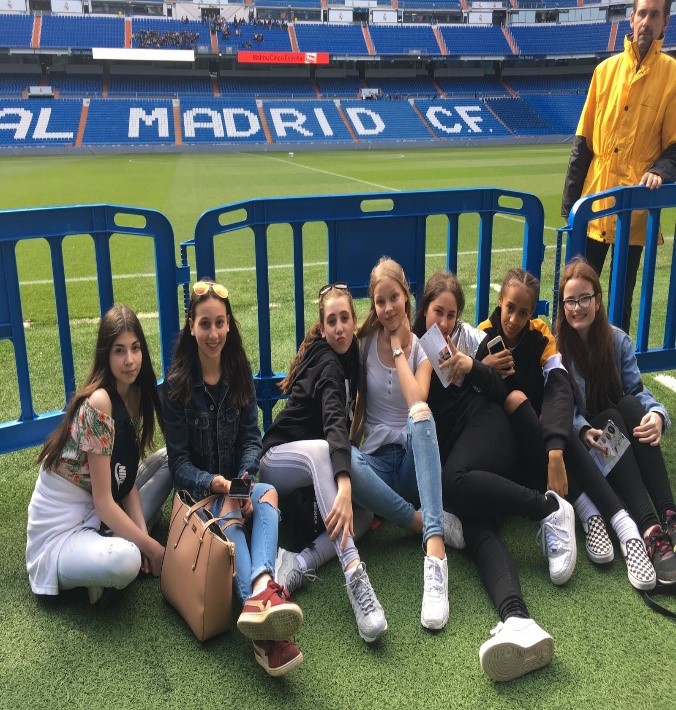 40 students from Years 9 and 10 spent five busy days in Madrid in early April. We stayed at the Hostal Toc in the heart of Madrid in dorm-style rooms but with cool bed pods!
We visited the Estadio Bernabeu, home of Real Madrid, as well as the largest bullring in the world, La Plaza de Las Ventas where we had an interesting guided tour including the history of bullfighting in Spain. Other highlights included a treasure hunt in the Plaza Mayor and Plaza del Sol area, a quick Art fix with Picasso’s “Guernica” as well as other master pieces in the Centro de Arte Reina Sofía, bowling by the Manzanares river, an exclusive ice skating session, a day trip to the beautiful city of Toledo and, to finish off, an afternoon at the theme park.
All pupils completed a workbook to improve their language skills and took part in speaking sessions in small groups. We all returned safely (and happy!) (and late!) just before midnight on Saturday 6th April!